I found this on the web..... this tape helped her run a marathon,AWESOME.

I use it in my practice everyday. It is better then old school ACE bandages.and has helped me in recovery of a torn ACL in my right knee and a torn labrum in my left shoulder from a Kayacking injury it wasn't a stand alone therapy but was aided support and speed up the recovery process.

I also want feed back from other professionals either PT's, OT's and Certified Athletic trainers.
I have seen excellent results in the pediatric population.


… as long as he uses the beige tone tape! Blue on white looks funny, see for yourself.


I was an oddity before the Olympics, running with kinesiotape on my shoulder and knees and ankles. God bless Kerri Walsh. After people saw her on the Olympics, they started coming up to me at various trainings and events and asking about MY kinesiotape.

My chiropractor in Denver trained with the lead chiropractic physician for the U.S. Olympic team. That doctor is probably the one who introduced the team to it.

The adhesive is very strong, you don’t want to pull it off before it’s ready to fall off. It has a wavy little pattern on it and pulls your skin up so that as you move, it breaks up little adhesions and helps fluids to move in and out.

Honestly, I swear by this stuff. We first used it on my shoulder, after arthroscopic rotator cuff repair and removal of a bone spur. It visibly helped alleviate the fluids. But, later it helped with other things. I run knock-kneed (like many women), which is hard on your knees and ankles. In fact, I actually injured my knee in my first few weeks of running. I’ve seen my teammates get similar injuries. They are told to stay off it and ice it. That’s about it. And, because they didn’t ever fix what CAUSED the problem, when they start running again, they get injured again.

My chiropractor had me ice it on day one, but he also did Graston Technique, infrared, Active Release Technique, and kinesiotape. I told him to be aggressive, there was no way I was going to be sidelined. So he worked his magic.

It was so effective, I just plain don’t train on long runs without it. It lasts about five or six days, so I have him put it on late in the week so it will be fresh on Saturday.

After a very slight ankle problem, we started doing Graston on my ankles, adusting them, and taping them, as well. I won’t say I don’t ever ache in my ankles but it happens late in the run and it only lasts a day or two. And it hurts less and less.

My lower back has been hurting… and my quads… I’m thinking we could tape all over the place, tape me like a mummy! Just don’t use the black and blue and pink tape. Looks funny in the photo finish !
Visit www.livingwellnewyork.com
Email Post

margodevine@msn.com said…
Patients love Kinesio tape! Here is a comment from one of my patients....

"Thank you so much for working with me two times in one day, and on such short notice. The magic you worked - adjusting me, and the "Volleyball" tape worked wonders and I was able to run the entire Rock N Roll Marathon! I had a slow and consistent pace for the entire race, and was able to run all of it and not have to walk at all. Even at miles 20 through 26 where runners typically are not doing so well, I was feeling great and running strong! As I ran, I kept remembering the quote, "Pain is temporary. Pride is forever." As I thought about that during the race I couldn't help but be thankful that I had no pain in my knee. I am so proud to have run all 26.2 miles, and am grateful that you were a big part of my first marathon. "
6:21 PM 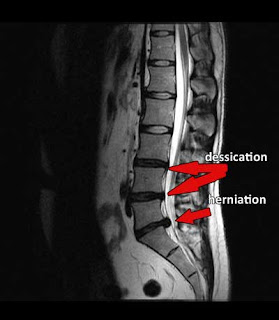 L5-S1 Disc Herniation & Dessication - What is it?

Avoid a Back surgery-Non Surgical Back pain solutions-